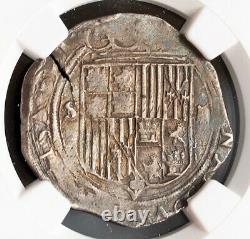 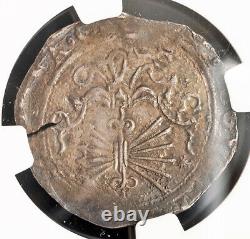 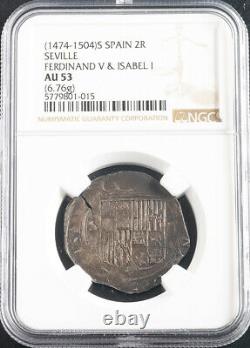 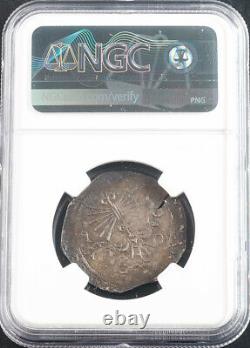 Reverse: Emblem of the catholic monarchs (Yoke above a sheaf of arrows). Legend: + REX : E : REGINA : CASTELE : LEGIO : Obverse: Crowned royal coat-of-arms, flanked by mint initial (S) and value (II). Legend: + FERNANDVS : ET : ELISAVET. At your attention a beautiful and early cob coin, struck at the Seville mint under Ferdinand II & Isabella I of Spain, also known as the Catholic monarchs, because of their fanatic beliefs, which led the expulsion of all Jews from Spain and even asked other European states (like the Vatican) to do the same or to force them to accept catholicism.

A nice, attractive and rare early cob coin! Is the collective title used in history for Queen Isabella I of Castile and King Ferdinand II of Aragon.

The title of "Catholic King and Queen" was bestowed on them by the Pope Alexander VI. They married on October 19, 1469, in the city of Valladolid; Isabella was eighteen years old and Ferdinand a year younger. Their marriage united both crowns under the same lineage. Isabella was named heir to the throne of Castile by her half-brother Henry IV of Castile.

She became Queen of Castille in 1474. Her husband Ferdinand became the King of Aragon in 1479 and their marriage united the two kingdoms. They were strong leaders who worked to unify Spain physically as well. This was largely achieved after the conquest of Granada in 1492. The birth of Isabella's son in 1478 consolidated the political stability as it meant a clear line of succession for the Spanish throne. The Catholic Monarchs set out to restore royal authority in Spain. To accomplish their goal, they first created a group named the Holy Brotherhood. These men were used as a judicial police force for Spain. To replace the courts, the Catholic Monarchs created the Royal Council, and appointed chief magistrates (judges) to run the towns and cities.

This establishment of royal authority is known as The Pacification of Castile, and can be seen as one of the crucial steps toward the creation of one of Europe's first strong nation-states. Ferdinand and Isabella were noted for being the monarchs of the newly-united Spain at the dawn of the modern era. The Kings had a goal of completing the Christian Reconquest of the Iberian Peninsula and to conquer the Muslim kingdom of Granada.

The beginnings of a series of campaigns known as the Granada War began with the attack of Alhama, a city in Andalusia. The attack was led by two Andalusian nobles Rodrigo Ponce de León and Diego de Merlo. The city fell to Andalusian forces in 1492. After 10 years of many battles the Granada War ended in 1492 when the Emir Boabdil surrendered the keys of the Alhambra Palace in Granada to the Castilian soldiers.

Ferdinand and Isabella had also overseen the expulsion of the Moors and the Jews from Spain. Between 1480 and 1492 hundreds of conversos (Jews or Moors that had converted to Catholicism) were arrested, imprisoned, interrogated or burned in both Castile and Aragon. According to John Edwards, the author of. Ferdinand and Isabella: Profiles in Power.

The Kings felt that it was necessary to remove a genuinely mortal danger from Spanish society that the Jews masquerading as Catholic Christians are destroying the church within. Also policy initiatives were developed after two incidents that included Jews. The first was an incident that occurred in 1490 that claims that a converso named Benito Garcia was found to have stolen the Host or the unleavened bread of the Mass.

It was believed that those who stole the wafers from the churches were inspired by the devil. Investigators, or rather the judicial police, had claimed that there was a conspiracy between 10 conversos and Jews not only to steal the Eucharist but also capture a young boy from La Guardia, near Toledo. They concluded that the Jews had kidnapped the young boy and forced him to suffer the same crucifixion that Jesus had suffered. All conspirators were found guilty in 1491 though no child's body was ever found. Such incidents only furthered the idea of the Inquisition upon the Spanish people. In 1492 Ferdinand and Isabella ordered segregation of communities to create closed quarters which would eventually become "ghettos". Finally, in 1492, with the Alhambra Decree Jews in Spain were given four months by the monarchs to either convert completely to Catholicism or leave Spain.

Tens of thousands of Jews departed from Spain to other lands such as Portugal, North Africa, Italy and the Ottoman Empire. Later in 1492, Ferdinand had issued a letter addressed to the Jews who had left Castile and Aragon, to invite them back to Spain if and only if they were Christians. They authorized the expedition of Christopher Columbus, who was given the name of Admiral of the Ocean Sea by the monarchs, which brought knowledge of the New World to Europe. Columbus' first expedition to the supposed Indies actually landed in the Bahamas on October 12, 1492. He landed on the island of Guanahani, and called it San Salvador.

He continued onto Cuba, naming it Juana, and finished his journey on the island of Santo Domingo, calling it La Española. His main goal was to colonize the existing discoveries with the 1500 men that he had brought the second time around. Columbus finished his last expedition in 1498 and discovered Trinidad and the coast of present day Venezuela. The colonies Columbus established and conquests in the Americas in the decades to come would lead to an influx of wealth into Spain, filling the coffers of the new state that would prove to be the hegemony of Europe for the next two centuries. Isabella ensured long-term political stability in Spain by arranging strategic marriages for each of her five children; political security was important for a country to be considered a great power.

Her firstborn, a daughter named Isabella, married Afonso of Portugal, forging important ties between these two neighbouring countries and hopefully ensuring peace and future alliance. Juana, Isabella's second daughter, married Philip the Handsome, the son of the Holy Roman Emperor Maximilian I. This ensured alliance with the Holy Roman Empire, a powerful, far-reaching territory which assured Spain's future political security. Isabella's first and only son, Juan, married Margaret of Austria, maintaining ties with the Habsburg dynasty, on which Spain relied heavily. Her fourth child, Maria, married Manuel I of Portugal, strengthening the link forged by her older sister's marriage.

Her fifth child, Catherine, married Henry VIII, King of England, and was mother to Queen Mary I. Their joint motto was "Tanto monta, monta tanto". The motto was created by Antonio de Nebrija and was either an allusion to the Gordian Knot. Tanto monta, monta tanto, cortar como desatar. Cutting as untying, or an explanation of the equality of the monarchs.

The yoke is another allusion to the Gordian knot. Are the initials of Ysabel (archaic spelling) and Fernando.

This symbol was later used by the fascist Spanish political party Falange, which claimed to represent the inherited glory and the ideals of the. The item "1504, Spain, Catholic Monarchs. Silver 2 Reales Cob Coin. NGC AU-53" is in sale since Sunday, May 16, 2021. This item is in the category "Coins & Paper Money\Coins\ World\Europe\Spain".