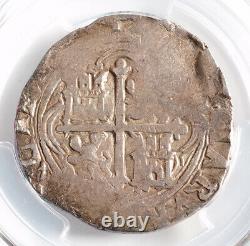 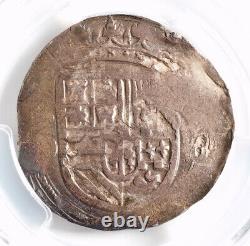 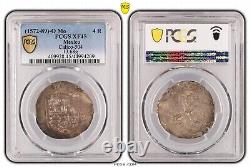 Certified and graded by PCGS as XF-45! Obverse: Cross of Jerusalem with lions and castles in quarters. Legend: [+ HISPAN] IARVM [: ET : I] NDI [ARVM REX]. Reverse: Coat of Arms of the spanish line of the House Habsburg. Barely recognizable mint and assayer initials (oM-O) to to left.

Legned: [PHILIPPVSS : II : DEI GRATIA]. The first coinage of the New World and what comes to mind when we think of Pirate Treasure are pieces of eight. These first coins, often called cob coins, were made from roughly cut planchets (blanks) by striking them with hand dies. The word Cobb comes from a simplification of the Spanish phrase, Cabo de Barra, which translates as, from a bar.

After the coins are struck, they are weighed by an assayer who cuts off any excess Silver which is why most coins have some of the impression cut away. The Cobb coin, like anything that is no longer available is becoming very scarce and hence more valuable. The few remaining Coins are the last vintage of the glory days of pirates and Treasure hunting and are fast disappearing into private hands. Son of Emperor Charles V (King Charles I of Spain), founder of the Spanish line of Habsburg.

1527 Valladolid, +1598 Escorial near Madrid. In 1580 Philip also claimed and took over Portugal. He strove for Spanish world supremacy and fought for the counter-reformation. He was married four times: Maria of Portugal (1526, +1545 following the birth of Don Carlos), Queen Mary Tudor of England (1554, +1558), Elizabeth of Valois, daughter of King Henry II of France (1559, +1568) and finally, in 1570, Anna of Austria, daughter of Emperor Maximilian II. However, his attempt to conquer England failed (destruction of the Armada in 1588, sea-battle of CÃfÂ¡diz in 1596), as did his efforts to subdue the revolting Netherlands (secession of the northern provinces).

Philip's ongoing war efforts overstrained his financial and economic resources and eventually led to the decline of Spanish supremacy. The Seventeen Provinces were a personal union of states in the Low Countries in the 15th century and 16th century, roughly covering the current Netherlands, Belgium, Luxembourg, a good part of the North of France (Artois, Nord), and a small part of the West of Germany. The Seventeen Provinces were originally held by the Dukes of Burgundy of the House of Valois and later by the Habsburg, first by the Spanish and then by the Austrian line. In 1568 the Seventeen Provinces started a (counter)rebellion against Philip II: the Eighty Years' War.

Before the Low Countries could be completely reconquered, war between England and Spain broke out, forcing the Spanish troops under Philip II to halt their advance. Meanwhile, Philip's Spanish troops had conquered the important trading cities of Bruges and Ghent.

Antwerp, which was then arguably the most important port in the world, had to be conquered. On August 17, 1585, Antwerp fell. This ended the Eighty Years' War for the (from now on) Southern Netherlands.

The United Provinces (the Netherlands proper) fought on until 1648 Ã¢â, ¬ the Peace of Westphalia. The definite loss of the southern Low Countries caused the rich Calvinist merchants of these cities to flee to the north.

Many migrated to Amsterdam, which was at the time a tiny port, but was quickly transformed into one of the most important ports in the world in the 17th century. The exodus can be described as'creating a new Antwerp'. This mass emigration from Flanders and Brabant (especially Antwerp) was an important driving force behind the Dutch Golden Age. While Spain was at war with England, the rebels from the north, strengthened by refugees from the south, started a campaign to reclaim areas lost to Philips II's Spanish troops.

They managed to conquer a considerable part of Brabant (the later Noord-Brabant of the Netherlands), and the south bank of the Scheldt estuary (Zeeuws-Vlaanderen), before being stopped by Spanish troops. The frontline at the end of this war stabilized and became the current border between present-day Belgium and the Netherlands. The Dutch (as they later became known) had managed to reclaim enough of Spanish king-controlled Flanders to close off the river Scheldt, effectively closing Antwerp off from a significant trade route and causing a considerable emigration of Antverpians towards the port of Amsterdam. Due to these events, Flanders and Brabant went into a relative decline in the 17th century.

This item is in the category "Coins & Paper Money\Coins: World\North & Central America\Mexico\Colonial (up to 1821)". The seller is "coinworldtv" and is located in this country: AT.