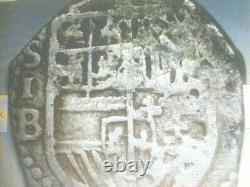 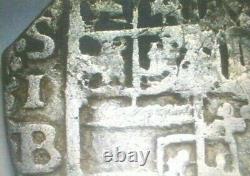 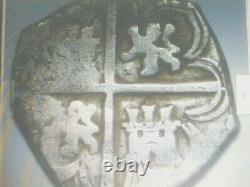 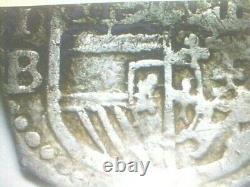 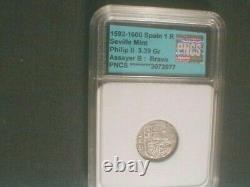 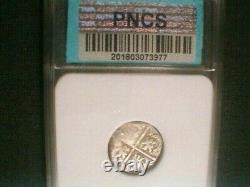 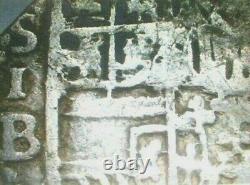 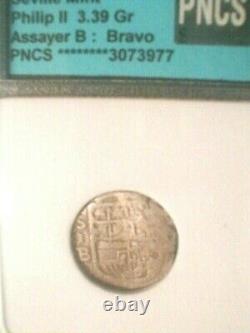 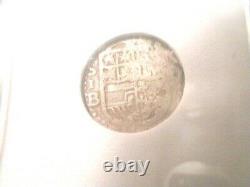 Multiple Mints in Spain were making all denominations of Reales. Assayers in Spain were supervising the heating and hammering of planchets from New World large Silver Bars from their colonies of Peru, Bolivia, Mexico, etc.

The Assistant Assayers were in training at these Spanish Mints before being sent to the various New World Mints to supervise the minting of cobs from the mined silver deposits. Offered is this slabbed Seville Spain One Real Silver Cob.

It is not a sea salvage coin. On the shield side at 9:00 is a S for Seville over 1 for the value over a B. He assayer initial B for Juan Bravo who was Chief Assayer at the Seville Spain Mint from 1592 to 1611. The crest of Portugal is faintly visible in the center of the coin.

The crest the configuration & style of Philip II (see below). This one real cob weighs 3.39 grams. The obverse has a sharp Hapsburg Shield. The reverse has the castles and lions in their correct positions.

The cross on the reverse is a Greek Cross and was found on the reverse of New World Mints at Potosi Bolivia and early coins minted at Lima Peru. This silver one real cob is listed with No Reserve. Son of Emperor Charles I of Spain, founder of the Spanish line of Habsburg. Philip II received from his father the following countries: in 1540 the Duchy of Milan, in 1554 the Kingdoms of Naples and Sicily and in 1555/56 the Netherlands, the Franche-Comté and Spain with its colonies. In 1580 Philip also claimed and took over Portugal. He strove for Spanish world supremacy and fought for the counter-reformation. He was married four times: Maria of Portugal (1526, ? 1545 following the birth of Don Carlos), Queen Mary Tudor of England (1554, ? 1558), Elizabeth of Valois, daughter of King Henry II of France (1559, ? 1568) and finally, in 1570, Anna of Austria, daughter of Emperor Maximilian II. However, his attempt to conquer England failed (destruction of the Armada in 1588, sea-battle of Cádiz in 1596), as did his efforts to subdue the revolting Netherlands (secession of the northern provinces). Philip's ongoing war efforts overstrained his financial and economic resources and eventually led to the decline of Spanish supremacy.

This item is in the category "Coins & Paper Money\Coins: World\Europe\Spain". The seller is "raymarcompany99" and is located in this country: US.