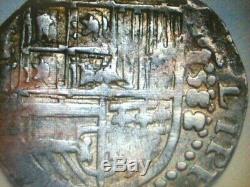 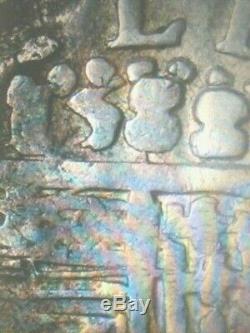 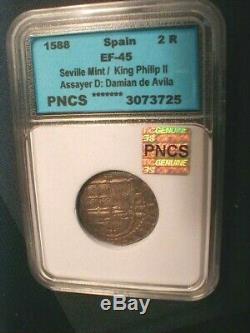 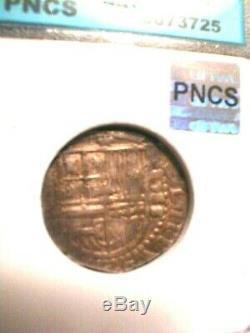 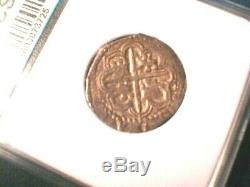 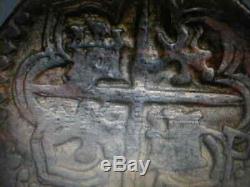 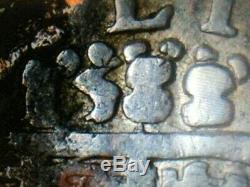 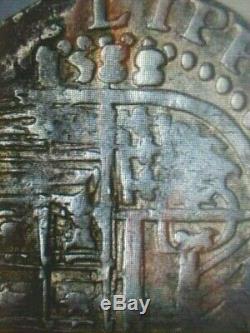 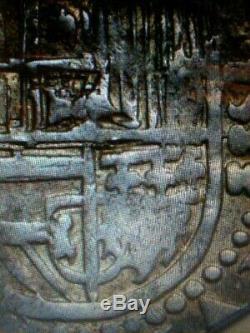 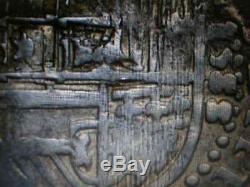 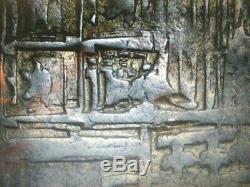 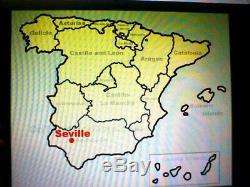 Prior to the Atocha shipwreck, multiple Mints in Spain were making all denominations of Reales. Assayers in Spain were supervising the heating and hammering of plachets from New World large Silver Bars from their colonies of Peru, Bolivia, Mexico, etc. The Assistant Assayers were in training at these Spanish Mints before being sent to the various New World Mints to supervise the minting of cobs from the mined silver deposits. Offered is this fully dated 1588 Seville Mint Spain Two Real Silver Cob that is a higher grade. It is not a sea salvage coin.

The full 1588 date is at 3:00 on the shield side. On the Greek Cross side, the castles and lions are sharp and fully visible.

He long time assayer D (see picture of cross side at 4:00 next to the castle) is for Damian de Avila who was Chief Assayer at the Seville Spain Mint from 1556 to 1598. This 1588 Two Real Cob is 23 mm or about the size of a U. It is thick & weighs 6.8 grams. The obverse has a Hapsburg Shield and some double striking can be seen.

The reverse has the castles and lions in their correct positions. The cross on the reverse is a Greek Cross and was found on the reverse of New World Mints at Potosi Bolivia and early coins minted at Lima Peru. This coin was minted during the years of King Philip II of Spain. This silver two reales cob is listed with No Reserve.

The Seville and the Segovia Mint were two of the seven main mints in Castile authorized to continue after 1497 by the Catholic Monarchs. The remaining ones were closed.

Previously, coins had been minted since 30 BC. During the Reconquest, coins were minted again from 1126 in the name of Alfonso VII. With Enrique IV, a new building was built for the Mint and inaugurated it in 1455. This building, known as Casa Vieja (Old House) after the establishment of the new Royal Mill Mint in 1583, was located within the walls of Madrid next to where the aqueduct goes through the city wall. Around the mid 16th century, German technology transforms the old procedure of the hammer into a mechanized process by using lamination machines powered by large waterwheels.

This process arrives quickly in Spain thanks to the Hapsburg Royal Family. By the end of 1580, Felipe II culminates a series of negotiations on artillery and maneuvers of troops with his cousin, Archduke Fernando de Tirol, who in gratitude gives him several of those devices that were manufactured for this purpose in the Mint Hall, near Innsbruck. In the spring of 1582, Jacob Bertorf, head of the Hall Mint and his collaborators, began the construction of the machinery and in February of that same year he sent the necessary technicians to prepare its implementation in Spain. The Royal Mill Mint de la Moneda de Segovia was founded in 1583 by Felipe II, on the other side of the city - outside the walls and at the foot of the Alcazár - to take advantage of the force of the Eresma River for its 14 large hydraulic wheels. At first, it was planned to install the machines in Seville where the metal from America arrived.

It also seems that other places: Lisbon, Toledo and Madrid. But in May of 1583, an old paper factory and flour mill on the Eresma River in Segovia was chosen specifically by King Philip II as the site for his new mint.

The work on the new building began on November 7, 1583, using plans drawn by Juan de Herrera, the most famous Spanish architect of all time, who had met with the King and the German technicians at the old mill site to jointly decide procedures. The machinery is transported in a convoy of 25 cars leaving on October 2,1584 from the city of Hall.

The chosen route was the so called "Spanish road", considered safe because, for the most part, it passed through territories controlled by the Habsburgs, which at this time united Flanders with the Iberian Peninsula, crossing the Tyrol. After a very long and arduous expedition of more than two thousand kilometers, crossing mountain passes, rivers, lakes and the sea, the machinery gets to Segovia on June 1,1585 and in four weeks the first test had already been coined.

Although the Segovia mill was the most advanced coin plant in the country, the Seville Mint gained most of the production due to its proximity to the port where metals arrived. The Mint Mill maintained its technological advantage until 1700 when steering wheel minting presses were installed in Madrid and Seville.

But during the early years of its activity, there were no more than a dozen similar plants worldwide. Its novelty was due to the great force that the Mint Mills applied on the metal strip while passing between two cylindrical wedges, allowing the minting of coins more circular, large and sharp than the hammer stroke. The circular coin of the Mint Mill was received for its face value without the need to weigh it, since the milling on its edges thwarted the mischievous intentions of those who cut gold and silver pieces off of coins with irregular edges minted by hammer stroke. The item "For Atocha Collectors High Grade! 1588 Seville Spain / 2 R Cob Asyr Damian" is in sale since Tuesday, December 3, 2019.