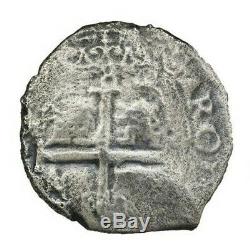 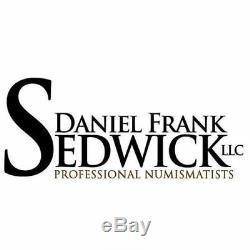 Potosi, Bolivia, cob 8 reales, 1680V. Bold but off-center cross, most of king's name, full pillars and bold full waves, somewhat smooth from corrosion all over. When salvage first began on this wreck in 1997, it was initially believed to be the Santa Cruz and later called El Salvador y San José, sunk in August of 1680; however, research by Robert Marx after the main find in subsequent years confirmed its proper name and illuminated its fascinating history.

Spanish attempts after that were also fruitless, so the treasure of the Consolación sat undisturbed until our time. Most of the coins offered were of low quality and poorly preserved but came with individually numbered photo-certificates. Later, after the provenance had been properly researched and better conservation methods were used, a Florida syndicate arranged to have ongoing finds from this wreck permanently encapsulated in hard-plastic holders by the authentication and grading firm ANACS, with the wreck provenance clearly stated inside the slab; more recent offerings have bypassed this encapsulation.

Ongoing salvage efforts have good reason to be hopeful, as the manifest of the Consolación stated the value of her registered cargo as 146,000 pesos in silver coins in addition to silver and gold ingots, plus an even higher sum in contraband, according to custom. Is the world's premier specialist in the colonial coinage of Spanish America, shipwreck coins and artifacts of all nations. In addition to our Online Store, we sell coins and artifacts at various numismatic shows around the nation.

All items are guaranteed authentic. (9) Any reproduction of the text and/or images in this listing in whole or in part is strictly prohibited without the express permission of Daniel Frank Sedwick, LLC.